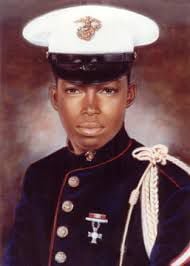 Written by Prentiss Finlay and reprinted from The Post and Courier

A new Navy destroyer will embody the selfless spirit of its namesake, Charlestonian Ralph Johnson, who leaped on a grenade, absorbing its deadly blast and saving the life of a fellow Marine in Vietnam, the ship’s commander Jason Patterson said.

The legacy of Johnson’s fighting spirit will be an example to the 320-member crew.

“He’s one of our American heroes,” Patterson said Wednesday.

Johnson’s sister, Helen Richards, spoke during an event at The Citadel to discuss plans for the event. She was the last person to see Johnson before he left for the service. He was 19 at the time of his death.

“It never gets easy. It’s always like I’m living it over and over,” she said.

Johnson wanted to be a Marine since childhood. He was serious about what he did and always willing to help.

“He would give you his heart,” she said.

Tickets for the commissioning ceremony are available at navyleaguecharleston.org where donations may be made for expenses associated with the festivities. The fundraiser also aims to establish a scholarship in Johnson’s name for a young African-American from South Carolina who wants to study science and technology at The Citadel.

On March 5, 1968, Pfc. Johnson was a member of a 15-man reconnaissance patrol in an observation post deep behind enemy lines overlooking the Quan Duc Duc Valley. When a grenade landed in a three-man fighting hole, Johnson quickly shouted a warning and hurled himself on the explosive to shield others from the fatal blast. His action prevented the enemy from penetrating the patrol’s perimeter and killing the remaining members of his patrol.

Johnson was posthumously awarded the Medal of Honor and the Purple Heart. In 1991, the Charleston VA Medical Center was renamed the Ralph H. Johnson Department of Veterans Affairs Medical Center.

In 2012, the Navy designated the Ralph Johnson as the name for its 64th Arleigh Burke Destroyer DDG 114. Patterson said the ship was built in Pascagoula, Miss., and will be based in Everett, Wash. It will serve in the western Pacific and potentially the Middle East, he said.

He will instill Johnson’s fighting spirit in the crew.

Captain Taylor Skardon, US Navy, (Retired) and Chair of the Navy League Commissioning Committee for this impressive ship is scheduled to speak to the East Cooper Breakfast Rotary Club in March, after registration will have closed.  Taylor is building a database via the website to provide to the Navy.  He anticipates registration will close out by the end of the year to provide time for the Navy to sort the list, prepare and mail the appropriate number of invitations and receive RSVPs for the ceremony.  Also the general admission seating will be on a first come first serve basis.  The longer people wait to register, the lower the opportunity they will have to attend the ceremony since the space available on the pier will not be able to accommodate everyone who registers. Everyone interested in attending the ceremony should sign up now.  This is a very patriotic ceremony which families will enjoy.  There are sponsorships available which guarantees a ticket and other items, but free general admission tickets are also available.